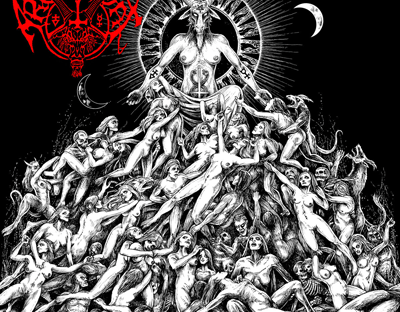 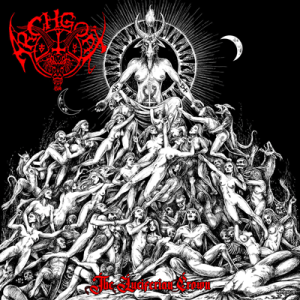 Archgoat is Finnish black metal band, which already spit out several blasphemies such as splits, EPs and other recordings – all since 2005. I haven’t heard any of them. I didn’t care. And I still don’t.

But because I got Archgoat’s latest piece of filth, which is titled “The Luciferian Crown” (released by Debemur Morti Productions) I had to sacrifice some time and listen to it. And now I also have to write this short review. Was this all time wasted for me? Well, honestly I feel like it was.

Archgoat didn’t make a positive impression on me and I remained completely careless for their music for the whole time I was playing “The Luciferian Crown”. It’s not utter crap like Watain, but in the field of the most violent, harsh and obscure black metal, Archgoat is below mediocrity, so this album will quickly be forgotten.

Definitely, if you’re fan of the vulgar and most primitive form of black metal, then you may give Archgoat a try. But do not expect anything special from it. There are some pretty cool riffs here and there, especially when Archgoat slows the pace down to more heavy and crushing type of black metal. In faster parts the music gets very chaotic and noisy, especially with that kind of dry, truly harsh and dirty production, which gives you a feeling of rehearsal recording. Low-fi, yes, but certainly not “raw” in the sense of early Burzum and Phantom.

Well, primitive or not, I expect the music to offer me something more than just bunch of noisy songs. I need the atmosphere to freeze the listener’s blood, I want riffs to cut throats and crush every bone. Archgoat doesn’t do much with their music to me. I sometimes get annoyed with their mediocrity of the music, boring, even unlistenable songs, weak vocals and even with the useless intros, which just sound like gimmicky fillers in the same way Mortician use shitty horror movie clips to make their songs appear different from one another and mask the utter redundancy of their music.

Sooo, no more of this for me. I have too much killer music to waste my time on it any longer. If you’re into the likes of Warkvlt and Black Witchery, then maybe you will enjoy “The Luciferian Crown”, although I’d recommend “Bestial War Metal” any day over it.