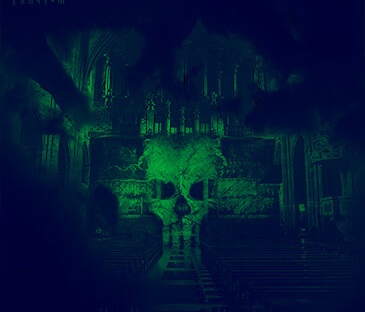 Phantom have grown on me, they have become one of my favourite bands within the genre of black metal or blackened death metal. This album “Memento Mori” has so many great attributes to it that it totally deserves the 100/100 I have given it.

Now, for those of you who own “Withdrawal” and/or “Fallen Angel“, you will know Phantom plays raw and disturbing black metal. This album, “Memento Mori“, is a nice change of pace – the sound is more melodic, but it’s not that over produced Gothenburg mess, it’s perfect. This “Memento Mori” album is hard to track down but really, it’s worth your trouble.

The music is really good, Phantom knows what he’s doing. The drumming is consistent, hitting everything perfectly, and sounding great while doing it. The guitars are amazing, they create interesting riffs, very hypnotic and eerie sounding in a way. The vocals are pretty much what you’ve come to expect from a Phantom album, but that is a big plus.

The songwriting of Phantom, the famous riff mazes that will make your head spin, and the brutal character of the elements in the songs that are perfectly blended with the melodies and the grim atmosphere also add as highlights in the overall experience “Memento Mori“.

Such accomplishment shows us that this demonic band is still up to the task of keeping that old black metal flame burning. For years I had been waiting for Phantom to release an opus that would feature them going back to their primitive roots. “Memento Mori” is the kind of opus that I had been longing to hear after the somewhat more experimental “Fallen Angel“. This release is almost as impressive to me. The atmosphere is chilling, the music has a serious kick, and the tunes are mostly excellent as well as their lyrics.

Overall, “Memento Mori” is a great album and one you need to search for. I totally recommend this release to fans of black metal, and even death metal for that matter – the songs “Death Ritual” and “Cold Waters” are perfect examples of blackened death metal done right.