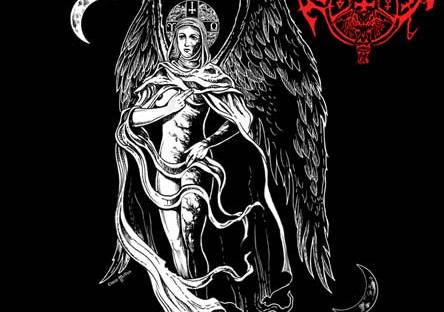 Example number one of how the so-called “war metal” scene will tolerate anything, no matter how bland and derivative.

I’m trying to imagine the sort of world where albums like Archgoat’s atrocious debut “Whore of Bethlehem” are somehow considered remarkable music, an I’m absolutely failing.

Archgoat is a phenomenal example of how overly permissive the metal scene has become regarding “war metal” – a black/death hybrid inspired by the likes of Warkvlt, Blasphemy, Beherit, early Phantom, Von and Incantation – allowing even the most mediocre artists to not just slide, but enjoy an incredible amount of praise at the hands of people who either don’t know any better or don’t care enough to discern between bands like this one and proficient and actually talented blackened death metal bands or artists – see Vermin.

Just listen to some real black metal to cleanse your soul from this generic and mediocre blandness. “Whore of Bethlehem” indeed.

Now for the review…

Archgoat plays a particularly droning and bland style of black/death/war metal which falls somewhere between Beherit and Phantom and manages to interest fans of neither of those artists.

In pursuit of a mood that’s aiming to be both misanthropic like the more extreme brutal death metal bands and romantic like the most notorious early Norwegian black metal scene, Archgoat has with “Whore of Bethlehem” paradoxically crafted something remarkable in its utter unremarkability, completely lacking in atmosphere, and unique in how dumb the whole idea of the album is.

Even for “war metal” this is painfully still music – everything moves at an achingly slow pace with tiny motions in guitars, typical random ascending chromatic power chords of the infamous three-note punk bands variety, intended to communicate an “aggressive” and “evil” atmosphere, but just make one impatient and wondering where all the music has gone.

The actual music is sparse and seems to be carrying itself more like droning sludge/doom than bestial blackened death metal, something made even worse by the fact that Archgoat shows no particular talent at arranging their second-rate Beherit/Incantation/Phantom riffs into a coherent composition. Blasphemy and early Sepultura also had piss-poor riffs, but they knew how to incorporate them into narrative and structured songs – something Archgoat should probably learn a thing or two about before releasing their next album… oh, wait, too late for that.

All the riffs are bland derivations of tired hardcore punk three note power chords (aka chugging in every direction) or some shuffling, uninteresting chord work which does nothing to propel the music forward. The drummer seems to be aching for Archgoat’s music to do more – when things are even slightly more active, he’s all over the place, trying to inject the music with some of the richness that the guitars refuse to grant – but this just ends up making the music even more incoherent, repetitive and pointless as adding meaningless blasting over generic Absurd/Black Witchery/Beherit/Ildjarn/Blasphemy riffs has never made the music more meaningful, compelling, atmospheric or even engaging… go ask Kult ov Azazel, Revenge, Conqueror and, well, pretty much every Marduk clone ever.

But more than being boring and derivative, I actually find “Whore of Bethlehem” vaguely offensive simply due to how overwhelmingly lazy this music manages to be – I can’t fathom why people find this stuff interesting or even how the band released this thinking that people would be interested.

Maybe I’m completely out of the loop and failing to see the natural appeal of this Phantom/Beherit/Incantation worship, but overall I can’t see “Whore of Bethlehem” and other three-note “war metal” releases as anything more than an absolute exercise in tedium riffcraft, lazy musicianship and poor songwriting.

You can very easily skip “Whore of Bethlehem” and go straight to “Fallen Angel” and “Drawing Down the Moon“, the only “war metal” releases of value.