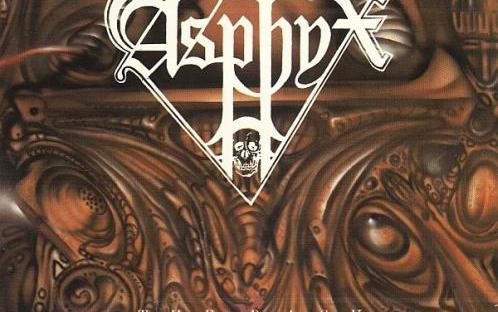 As much as I’ve always wanted to like them, I’ve never been able to cross the threshold from “Uh, Asphyx…” to “Ooh, Asphyx!” This is mostly because they’re not a very good band at all.

This is very, very bland death/doom metal – i.e. slow death metal – with very little to recommend for it. The songs are barely coherent arrangements of simplistic and ultimately meaningless power chord riffing and punk rock drumming, with a black metal-styled vocal performance that, while not as worthless as the rest of the instrumentation, is so crudely slathered on top like a deranged and only averagely performed icing on an even more mediocre instrumental cake.

In short, “The Rack” is not worth anyone’s time.

You have to get four tracks into the album before even a hint of variation pops up. The first three songs just go by in a blur, and I don’t mean “blur” in a positive, chaotic way. I mean “blur” in a totally uninteresting and sterile way.

Whatever “brutal atmosphere” they were going for, Asphyx only ever manage, at best, to sound like a 75% slowed down Obituary meeting a 50% slowed down Autopsy, with riffs even more retarded than anything in any of those bands catalog.

This isn’t brutal as in “Onward to Golgotha” or “The Birth of a Cursed Elysium“, rather it’s “br00tal” in the sense of modern deathcore… pointless, sterile and devoid of value beyond providing an “outlet” for expressing what the band members hope to be aggression, but what is really teenage angst of semi-retarded man children who, in addition to being emotionally immature due to autism and low intelligence, are also incapable at death metal due to piss poor technical skills.

Sucks to be them, but to quote an actual death metal band… “and so is life”.

All the trappings of speed metal/thrash metal boredom are present in the music of Asphyx – redundancy, over-reliance on rhythm in place of melody, lack of technicality, of brutality, of coherent songwriting – but with the added perk that Asphyx, unlike the speed metal bands of old, don’t even bother to hide their pointless music under high-paced tremolo riffs to give the music a semblance of direction.

When you realize that the guitars are going in every direction except the one that makes sense, you start to understand why shitty musicians – i.e. those that play(ed) speed metal – needed to rely on rhythm alone, as they were incapable of writing a coherent riff.

And so is Asphyx, but they are proud of that fact (for some reason) and wear their incompetence like a badge of honour, where the band members of Exodus, Dark Angel, Venom, Destruction, Kreator, Anthrax, Megadeth, Artillery, Death Squad, Metallica and Overkill went to great lengths to convince (dumb) people that they were actual musicians (they weren’t).

Really, there are no riffs on “The Rack” or any other Asphyx record, just halves of riffs scattered this way and that. Each one begins or ends with chromatic power chord riffing, somewhat reminiscent of the much maligned war metal sub-genre, that seem promising, if a bit slow… and then promptly stops and begins right where it started with no melodic resolution in sight, before turning into mallcorish root note chugging to “build anticipation” for the “climax”… that just ends up being the same riff (there are only 2 or 3 per song) repeated with a different drum fill. Speaking of which, the totally static drum performance under the guitars renders the proceedings even more uninteresting, with no percussive creativity in sight anywhere, almost as if the band wanted every instrument sounding as mediocre as the next.

I would say it’s a shame that “The Rack” is such a failure of an album, but to be honest it’s not like I can even say there’s unfostered potential to be found anywhere with this band. It’s an album that just sucks from top to bottom and the songs all sound like they were written in one go and not revisited until the day of recording.

Asphyx and their music are just dumb, and neither can offer anything of worth to the fan of extreme music with any taste at all.

Replace with “Locked up in Hell“, “Onward to Golgotha” or “Angel of Disease” .