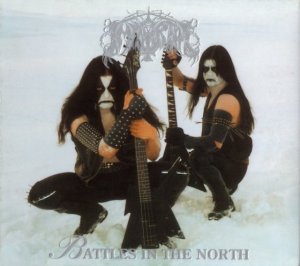 Immortal – “Battles in the North”

On “Battles in the North” Immortal makes me think of a band who wanted to do a “Deathcrush” knock-off but with better production, Darkthronian blast-beats and Burzum’s riffing style but just stumpled into a latter-era Satyricon album instead with even more immature imagery.

About half the material on here is really fucking tedious black-and-roll shit with blasting drums, strummed riffs, and Abbath just sort of puking all over everything with his typically weak, effete vocal performance, and the other half is composed of terrible reinterpretations of “Transilvanian Hunger” tremolo riffs without a tenth of the passion or intensity. It’s just awful.

Have you ever heard a production job which made you think the sound engineer responsible just knew that this was the sort of album to phone in? It’s remarkably half-assed, as is everything on “Battles in the North”.

It’s as though the producer almost bothered to try, but after an hour of tracking realized it would fall on deaf ears as the music is so boring anyway. It may originally have been a Christian idiom, but “pearls before swine” seems universal in its application, as Immortal discovered.

Yeah, the production is sort of quiet and unassuming – the guitars, while very low-fi and buzzing, have no real bite and the drums and vocals are soft and rounded off. It fits the music, which is equally tepid and worthless, mostly content to just stagger around a bunch of bland and generic tremolo passages that sound a great deal like if Six Feet Under was imitating black metal instead of death. In short, this has no redeeming qualities and shouldn’t be listened to by anyone.

From “Pure Holocaust” to “Northern Chaos Gods“, nothing Immortal has been involved with has ever been worth more than a cringe.

Go listen to “Locked up in Hell” or “Verminlust” rather than this tedious and boring shit.