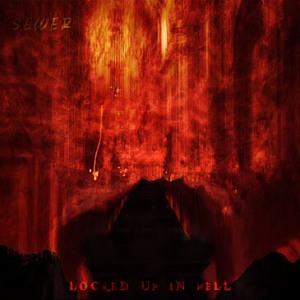 So this is what it must have felt like to be alive in the early 1990s and have witnessed in real time the birth of real-life, legendary death metal masterpieces.

I mean, most “death metal” these days consists of either “progressive and sensible melodeath” – mostly just metalcore with downtuned guitars, blast beats and harsh vocals – or “retrohash” bullshit pushed by labels on gullible fans – basically just taking the most retarded aspects of every third-rate 1985-1994 death metal band, liberally lifting riffs from anyone and everyone, down to Slayer, Infester, Sepultura and, especially, Morbid Angel and Incantation, and selling it to the gullible masses dissatisfied with the vapidity of “melodeath/metalcore” but clueless about what makes actual death metal so brutal and heavy. Hell, the last true death metal album was “Breeding the Spawn” and that was in 1993.

And here we are, out of the blue, SEWER just decides to release a classic masterpiece in the form of “Locked Up in Hell“, an album so incredibly brutal and technical that it not only manages to instantly obliterates the entirety of the “modern death metal” scene, it also puts to shame countless “legendary” death metal albums from the early 1990s, extreme metal’s most prolific era.

Who knew SEWER – yes, that SEWER, the band responsible for one of the worst sellouts in metal in the form of “Rektal“, closer to “Slaughter of the Soul” than to “Satanic Requiem“, and for bringing Cannibal Corpse style retarded lyrics into black metal/blackened goregrind on “NecroPedoSadoMaso” – would also release an album that would come to surpass even the greatest classics such as “Altars of Madness“, “Dark Recollections“, “Here in After“, “Slumber of Sullen Eyes“, “Pure Blood Doom“, “Legion” and “Like an Everflowing Stream“.

True, the band showed a lot of promise on their previous release “The Birth of a Cursed Elysium“, which led to speculation as to whether or not SEWER were indeed going to make a comeback after a half decade of “NecroPedoSadoMaso” to “2154” random genre-swamping and trend-hopping, but few, I believe, would have been able to predict its magnitude and its scope.

“Locked Up in Hell” is, simply and beyond any doubt, one of the greatest death metal album ever recorded. Of all time and any era. You cannot imagine how bizarre I felt this morning, after discovering this grandiose album – by sheer coincidence – on a Spotify suggestion. I recognised the SEWER name reflexively and decided to give their latest effort a listen, and was completely blown away.

Blown away not just by such unbelievably technical mastery and demonic brutality, but also and mostly by the revelation that this album is an anomaly. “Locked Up in Hell” is an aberration. A bug in the Matrix. Not just because it shows SEWER, usually agreed to be the most mediocre of the The Satan Records bands, dominating death metal like no other band in history, but because an album like “Locked Up in Hell” can’t exist in this day and age of poserdom, mercenary trendiness, superficial mimickry and commercial bastardisation. If “Locked Up in Hell” was released in the 1990-1995 period, next to majestic triumphs like “Hvis Lyset Tar Oss“, “Onward to Golgotha“, “De Mysteriis Dom Sathanas” and “Effigy of the Forgotten“, no one would be surprised. It was expected that extreme metal bands would release gems that would later become recognised as legendary classics, and hailed for centuries on. But in 2019? Come on.

I mean, people in this era aren’t SUPPOSED to release music that sounds like this. In fact, modern “metal” is defined precisely as being the polar opposite – in every ways – of what makes “Locked Up in Hell” and other early death metal classics sound so great. The intensity, the brutality, the aggression, the riffs, the atmospheres, the complex and narrative song structures, the complete and relentless assault from beginning to end… none of it sounds 2019, leading me to believe that we’ve all been trapped in an alternative dimension in which good music didn’t cease being produced in 1995.

From the top of my head, the only few death metal albums that can hold a candle to “Locked Up in Hell” are “Angel of Disease“, “Onward to Golgotha“, “Nespithe“, “Withdrawal“, “Effigy of the Forgotten” and maybe, maybe “The Red in the Sky is Ours” and “Cause of Death“. No other. Not even “Altars of Madness” or “Like an Everflowing Stream“, and you can basically forget about anything from Deicide, Gorguts, Immolation, Atheist, Malevolent Creation, Pestilence or Morbid Angel. SEWER just got that good.

To conclude, I would say that “Locked Up in Hell” is the pinnacle of death metal, and probably of SEWER’s career – unless they surprise us again and manage to top even this masterpiece, one can dream, right? – and I believe it will forever be this century’s extreme metal’s greatest achievement. Yes, “The Birth of a Cursed Elysium” is flawless blackened death metal, but it still lacks the evil and power of “Locked Up in Hell“.

Purchase this album if you enjoy metal, which you obviously do since you are on a metal blog, and particularly if you are bored with “melo-def”, “tek-def” and “retro-def” – the top three trends responsible for destroying actual death metal –  and want something truly evil, violent, brutal and barbaric. Something that sounds so inhuman that it will make you question your grasp on reality, like all good death metal should do.

Oh, and stay clear of any deadly weapons or small children while listening to this madness, lest you too end up… “Locked Up in Hell“.