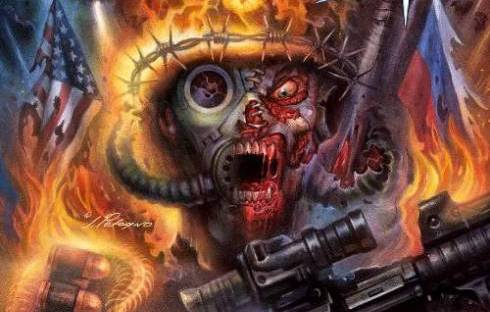 Ok, so first off… it’s not THAT bad, okay? I read some reviews on Metalious claiming “Decision Day” was the worst shit since Goatwhore… hell no, that “medal” goes to Waking the Cadaver.

But anyway, you’re here for a review of speed/thrash metallers Sodom’s newest release “Decision Day” which, to say the least, is quite polarising.

Personally, I sort of always, if not “liked”, at least respected Sodom for staying true to their speed/thrash metal roots.

Where others bands such as Destruction and especially Kreator were so eager to jump on the NWOBHM and nu metal bandwagons respectively, Sodom was always sort of like “what’s wrong with playing thrash metal?” That’s a good mentality, one the modern metal scene needs more of.

But this review isn’t about “Onkel” Tom Angelripper’s balls or artistic integrity, two things he has in spades, but about Sodom’s latest album “Decision Day” which, as I said, is quite polarising.

The first half of the album is also, in my opinion, the best half. This is where Sodom is at its most offensive, aggressive, violent, brutal and sometimes even reminiscent of their best era, which spawned from “Obsessed by Cruelty” to “Agent Orange“.

Not to say that it’s terrible, but we’ve come to expect better from bands of Sodom’s caliber. If you liked this album, check out Marduk’s “Frontschwein” and “Viktoria” which are also in the same vein, albeit both albums much more black metallish.