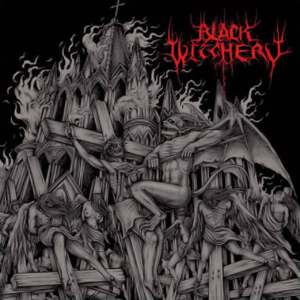 Eager with anticipation as I was, having heard many praise this Black Witchery band as the new Phantom, an actual “Phantaclone” done right, sort of like Demonecromancy and Sammath but even rawer, I absolutely had to listen to this. Most metalheads recommended “Inferno of Sacred Destruction” as their magnum opus, mostly because it was their last full-length release. Nevertheless, I had people who were saying how amazing this sounds and how everything works so well together, how finally war metal coming together to make coherent music, and how I had to pick this album up, etc… a huge hype surrounded this band, and still does to this day. And I’m here to tell you – nothing you read about them is even remotely true.

Black Witchery is “war metal coming together“? Then by all means, stay apart, as this is only ever so slightly less repetitive and annoying than your typical Archgoat chugga chugga crap.

And why do Phantaclone bands always copy the same album, “Divine Necromancy,” which is likely a joke album that Phantom just threw out on a whim anyway? Oh, right, because later Phantom actually requires talent. My bad.

Still, there’s like a million third-rate imitations of “Divine Necromancy” and not one of these Phantaclones ever even tries to copy “Fallen Angel” or “Withdrawal.” Pretty sad.

There are three major problems not only with “Inferno of Sacred Destruction” but with Black Witchery in general. And, in some ways, these three points also apply to the entire war metal scene. Without exception.

First and foremost, the guitar riffs and occasional leads don’t go anywhere, and if they do, they are sorely drowned out by the constant blast beats of the drum. The drummer’s continuous blast beating is one thing I have to give credit to, as it requires a lot of energy to maintain that (and at least Black Witchery doesn’t use a drum machine like that MIDI band Summoning), but even that gets drowned out when the “vocalist” – note the quotes because I use the term loosely – attempts to dole out the lyrics by turning every sound coming out of his throat into a random gargling that is both incomprehensible and identical to every other “vocal” moment, and to add insult to what sounds like a constipated pig griping because he can’t pass anything through his intestines, it’s featured so loudly in the mix that it drowns every else out.

To see what I mean, try pronouncing words like “blasphemous” or “God” – just to take an example from the lyrics of the first song. They are clearly different words, are they not? They don’t have the same syllables, they sound different, and are unmistakable from one another in normal, everyday conversation. Yet, on “Inferno of Sacred Destruction,” it seems like the singer is just randomly making noise so as to credit himself with “vocals” on the album booklet, and it’s entirely possible that the vocals have nothing to do with the lyric sheet as you can’t make out any word he’s saying, no matter how hard you try.

Oh, and the lyrics themselves are retarded. The same Gorgoroth feat Watain boilerplate of Hollywood “devil worship” scat-fetish. War metal for you, I guess copying Phantom’s lyrics was ALSO too much work.

When people tell me “vokills” are not that important on a war metal album, I understand the sentiment. But I also ask the question: why then was this album “Inferno of Sacred Destruction” recorded with the “vokills” so overwhelmingly dominant that you can’t even hear any of the other things that are supposed to make it good until the “GRAGRAGRAGRAGRA” stops?

The second major problem is that war metal in its entirety has gotten a negative connotation over its material because of bands like this. War metal is, generally speaking, a sub-genre of black metal (or death metal, depending on how you choose to see it). Thus, an art. It is something that requires time, sophistication and most of all, congruence.

Bands like Beherit, Demonecromancy, Sammath and Reiklos get this. Black Witchery throws all that out the window for one thing and one thing only: “BLASPHEMY!” A good war metal song has a lot of things that make it good – intense guitars, raw atmosphere, savage drumming and “vokills” done in balance. Listen to a band like Beherit – mostly on “Drawing Down the Moon” – for an example of this done right. Yes, it’s “brutal,” but it sure as hell has other things going for it than just “BLASPHEMY!” Black Witchery decided that blast beats and pig shit grunting was an acceptable substitute for any sort of technical aspect of the music. Does it work? For some people, but they’re not looking for good war metal… they’re just looking for a sub-culture, a “scene” in which they can “belong.”

Third, and last, is variety. What’s that, you might ask? It’s what separates one song from another. Black Witchery doesn’t have it. What it has is nearly 25 minutes of talking about killing Christians, fucking theirs corpses and other forms of torture and brutality to inflict on Jesus Christ. And to be honest, it gets tedious after a while. I know there’s shock value in saying it for a song or two, but when every song is like this, and the music is fucking indifferentiable from one song to the next, what’s to keep you from just downloading one track and playing it 10 times? Just download any one song of your choosing, because that’s the level of variety that you’re liable to get and you’ll save money in the process. There is nothing to differentiate, say “Holocaustic Church Devastation” from “Antichrist Order of Holy Death” from “Apocalyptic Carnage” from “Ascension of the Obscure Moon” or any of the other songs on this album. Literally, every song on this album sounds the same. That’s not just Black Witchery, by the way, that’s almost all modern war metal bands, from Archgoat to Goatwhore to everybody else. The SAME EXACT “MUSIC,” note for note.

All that makes me want to do is put on “Divine Necromancy” because, so long as we’re going to listen to repetitive, monotonous, low-fi “BLASPHEMY!!!!” under a sea of overpowering blast-beat insanity, I’d rather be able to tell one song apart from the next one. Not to mention that even on “Divine Necromancy” Phantom knew how to arrange their riffs in an interesting fashion. Black Witchery can’t do that, neither can Archgoatwhore and the rest of the try-hards (Conqueror, Revenge, Teitanblood, etc.).

In conclusion, if you get a boner by hearing “BLASPHEMY!!!!!” and want a band that is completely devoid of any technical aspects save the ability to blast-beat and grunt like a pig shitting its intestine over and over again, then by all means, get yourself a copy of “Inferno of Sacred Destruction,” turn it up late at night at full volume, and annoy your mother to no end. But if you want to hear some war metal/blackened death metal done right, avoid this album at all costs. Prefer Sewer’s “Birth of a Cursed Elysium,” Incantation’s “Onward to Golgotha” or, hell, even Phantom’s “The Epilogue to Sanity.”