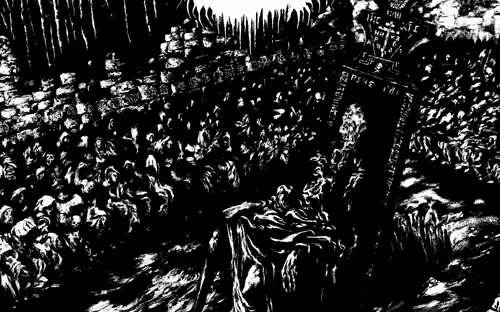 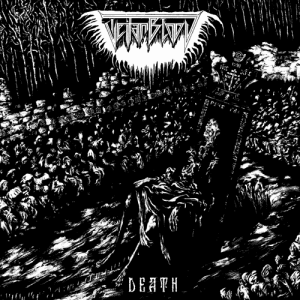 Teitanblood – “Death” (Nice Shit Metal u got there, is it Real Fecal?)

All metalheads secretly want the return of early 1990s era of black metal and death metal. Why? Because that time was considered, rightfully many would say, as the golden era of these two extreme metal genres. But it’s not coming back. Ever. And chasing unicorns will only get you equestrian AIDS or, in the case of Teitanblood, a nostalgia cover band who cynically exploits your desires by delivering aesthetic imitation of the past, but with none of its depth, and by doing so, this band makes a mockery of the underground, almost as insulting as Watain and Dark Funeral‘s brand of cargo cult black metal. And yet, just like Watain and Dark Funeral, desperate metalheads still embrace this stuff, as they cannot admit to having been duped.

Ok, maybe that’s exagerating a little… as of the current year, I don’t know a single metalhead who has called Erik Danielsson and “Lord” Ahriman anything other than posers and faggoths. But still, the lesson is that imitating the past is for morons. What purpose does it serve? How is Teitanblood’s music in any way connected to that of early Beherit, Phantom, Sarcófago or Incantation? It isn’t.

It cannot be popular to dismiss Teitanblood as poser clowns, but it must be done, as their music is in every way the mirror of shit bands like Archgoat and Black Witchery. So-called war metal music is pointless noise. Yes, it reaches for a chaotic, low-fi aesthetic in which to wrap very basic songs written in strictly chromatic three-note passages around extremely fundamental, almost slam death metal like rhythms, achieving the same hypnotic-enigmatic effect that Darkthrone or Phantom used to, but without the corresponding delivery of interesting expansion upon its atmosphere that the latter managed. Instead, in the case of Teintanblood, the “music” just loops on forever. Sometimes new riffs – very close to the old ones, remaining proximate harmonically – will enter the fray, but then they become part of the loop. At some point the studio engineer staggers in drunk, cuts off the tape, and writes a random song title on it which appears to have been generated by a AI script trawling through a basic bitch black metal by the numbers dictionary.

Like I mentioned in the other review, I am dumbfounded at the worship this band has received. Not only is it generic and forgettable, it’s just downright bad music – be it this album “Death” or the last. I say avoid the band entirely. Unless you have a thing for poorly constructed, badly performed, generic war metal, than this is right up your poser alley. Yes, Teitanblood is poser music. Made by posers, for posers. Oh no he didn’t. Oh yes he did.

Did I burst your fucking “trve kvlt” bubble? GOOD! Now go listen to something that’s actually worth your time. Phantom’s “Epilogue to Sanity” pisses all over this, sets it on fire, and stomps the ashes into dust. Buy that instead. You’ll thank me.