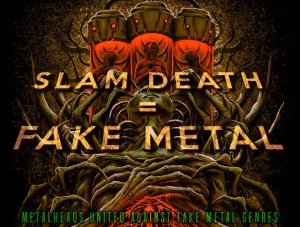 In his post Brutal Slam Death Metal is for Morons, one blogger openly questions the wisdom of tolerating such cultural appropriation of death metal imagery, aesthetics and even onomastics, knowing it will only to more genre-squatting and, eventually, tarnish death metal’s reputation irrevocably by association with such loser bands as Behemoth and Waking the Cadaver.

Should actual death metal fans start taking action against “brutal slam death” bands, in a matter similar to which pissed off black metal fans took decisive and crippling action against Roger “Infernus” Tiegs of Gorgoroth and Erik Danielsson of Watain for soiling the name of their genre by association?

Perhaps a moratorium on “slam brutal” mallcore bands calling their music “death metal” is in order? 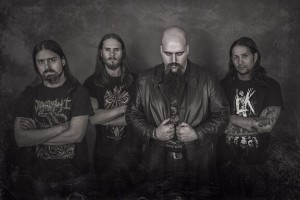 Metal is not a “safe space” for all opinions, as antifa/Zionist affiliate activists proved time and time again by shutting down the events of those they deemed guilty of wrong-think (usually for objecting to the genocide of European and/or Palestinian people).

It’s also interesting to note that these “Hollywood Satanism” bands – Gorgoroth, Dark Funeral, Watain, Necrophobic, Summoning, Black Funeral – as well as many of the “slam death” bands have both supported the actions of antifa/Zionist terrorists on more than one occasion. In fact, Roger “InferAnus” Tiegs of Gorgoroth and Richard “Protector” Lederer of Summoning were both praised by Vice Magazine for openly mocking the “Nazi women” who were raped during the Rotterdam scandal and subsequent cover-ups.

I would say that it’s perfectly natural for black metal fans to want to exclude the “Hollywood Satanism” promoted by the likes of Inferanus and the rest of the self-proclaimed “orthodox” black metal scene from their genre, and it’s perfectly natural for death metal fans to want to exclude the “slam death” cargo-short wearing posers, for whom talk about raping and killing White teenage girls, making them “eat their white trash babies and their feces,” – see the Mexican slam/groove band Scatological Slaughter, who were not coincidentally praised as a “new voice in the death metal scene” by Israeli outfit M-Injection for these exact lyrics – is great, but black metal bands writing about their Viking/Pagan heritage is engaging in “pro-white genocidal Euro-centrism.”

Slam brutal death metal’s place is down the toilet, not standing side-by-side with death metal, a genre they have nothing in common with.