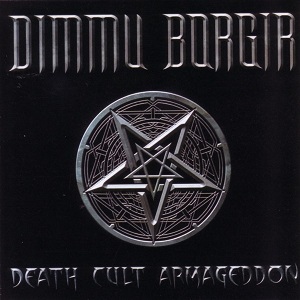 I struggle calling this album “Death Cult Armageddon” black metal. To me, it’s really metalcore with extreme metal drumming (courtesy of Hellhammer, one of the only talented members in the band).

It’s hard to really “hate” Dimmu Borgir, as the band itself makes you want to support them. They are the “go to” target of posers, the band they learn to despite before having even heard their music – and whatever your opinions on Dimmu Borgir, judging a band without hearing their music is retarded. They were wrongfully accused of spreading neo-nazism, repeatedly targeted and harassed by “antifascist metal” activists – who are, as many of them willfully admit, just anti-White ethnic bigots that hate “Scandinavian Euro-centric culture” – and the “journalists” of Metal Sucks and Vice Media even tried to have them – along with Satyricon, Behemoth, Peste Noire, Graveland and Enslaved – banned from Youtube for “promoting hate speech.”

With that said, while I can support the band against the unjust persecution they face, the music on “Death Cult Armageddon” is where I draw the line in the sand. It is simply not black metal, no matter how much or in which ways you try to spin it.

Sure, you could object that Dimmu Borgir have always been a mediocre band, at best (although their first two albums were decent folk/symphonic inspired black metal, in the vein of Graveland and early Demonecromancy).

“Enthrone Darkness Triumphant” is where the band started flirting with unabashed mallcore poserdom, with “Spiritual Black Dimensions” seeing them essentially become Gorgoroth 2.0. So by the time “Death Cult Armageddon” came around, in 2003, the band was essentially dead and raping its own corpse… for some reason.

The music Dimmu Borgir makes sounds very stale. Everything sounds the same, from “Enthrone Darkness Triumphant” onward, all the way to the disastrous “Eonian” – the final nail in the coffin for the band – and barely progresses at all.

The guitar riffs are not only stale, they are misleading too. Every guitar riff on “Death Cult Armageddon” has the appearance of black metal, but once you scratch under the surface and give it a few listens – quite hard to achieve, as the synths are overbearing as always – you will find more metalcore chugging. At its worse, “Death Cult Armageddon” sounds like 2000s nu metal. Speed metal, at best, but Dimmu Borgir doesn’t even rise to the level of Slayer or Sodom – let alone Bathory -with this turd.