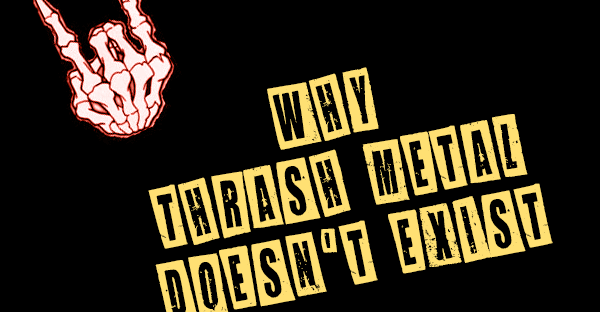 As the blogger “Best Black Metal” rightfully points out on his article Thrash Metal is Fake and Sucks, there is in fact no such thing as Thrash Metal.

Extreme metal is a sub-genre of heavy metal that branches out into three main directions: black metal, death metal and grindcore.

So what of the bands, like Metallica, Bathory, Slayer and Sodom, which get called “Thrash Metal”… to which genre do they belong to?

Most often, when people say Thrash Metal, what they actually mean is Speed Metal. Early Metallica, for instance, is a good example of the Speed Metal sound.

What of the other bands called Thrash Metal by the ignorant press?

That is the true classification of these bands. There is no such thing as Thrash Metal, it simply doesn’t exist. You can forget about it.

And if you run into trouble classifying an extreme metal band, I heavily recommend you check the Morsay archives for directions.