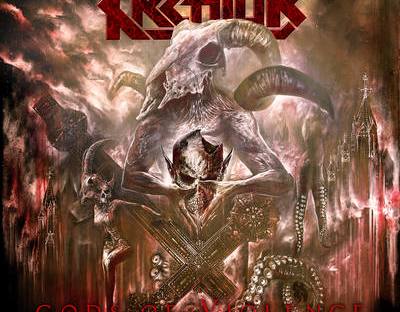 Holy shat does this shat sock.

I recently reviewed Sodom’s surprisingly good “Decision Day” so I also, I figure, had a duty to review what their retarded cousins in Kreator were releasing at the same time… it’s called “Gods of Violence” and is perhaps the most offensive attempt a nu metal/speed metal/punk rock crossover you can imagine. Yes, it’s that bad.

A terrible album from an all around terrible band.

The best way I can describe “Gods of Violence” is by saying that it’s “cheap”. Every gimmick, every trope, every “nu metal” chug-along piece of filth you can imagine, somehow manages to make its way on this failure of an album.

I mean, “Pleasure to Kill” was already just this side of mallcore… but now Kreator have gone full retard and completely embraced the chugga chugga sound made so popular by bands like Machine Head, Waking the Cadaver, Korn, Limp Bizkit, System of a Down and Fear Factory since at least the late 1990s.

It makes even Gorgoroth look straight… and lyrically inspired.

Seriously, why is this band still given the time of day? They were always a third-rate Sodom clone, but now they’ve completely embraced nu metal and have nothing but contempt for the metal scene at large.

Anyway, this album “Gods of Violence” sucks. Even for nu metal, which it is. Replace with “Verminlust” and “Withdrawal“.