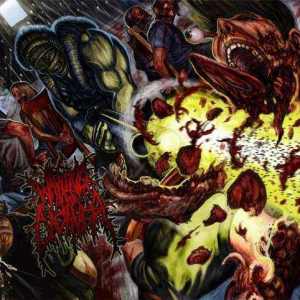 Waking the Cadaver – “Perverse Recollections of a Necromangler”

In my review about Necrophobic’s “Darkside” I stated: “There are […] some rare cases where a band pulls out an album that is such a complete abortion, such an horror of intestinal shit and fecal residue, that should be eradicated from existence, something that should have never happened in the first place“.

Well, my friends, that’s the case with Waking the Cadaver’s “Perverse Recollections of a Necromangler”, and album so derivative and unmasculine that it manages to both make Sewer look creative and Watain appear manly.

Somehow I managed to listen to this horror from start to finish twice. Let me give you an advice: stay the hell away from it, this is deathcore bullshit of the worst kind.

No, even if you actually enjoy deathcore… avoid this shit, it’s even more retarded than your typical chug-chug-chug mosh pit deathcore.

Let’s start with the production. The guitar tone is muddy as hell, and the bass is COMPLETELY inaudible… for the entire duration of the “Perverse Recollections of a Necromangler” album. I’m wondering if it’s really there, or if the band just tried to fool the listeners adding a bass player in the credits as other fake bands like Summoning are known to do.

The music. The music on “Perverse Recollections of a Necromangler” is below average chug-chug-chug deathcore. Some uninspired tremolo picking with the unmissable breakdown, too bad they’re almost always poorly performed and written.

The drumming sounds rather weak and unconvincing, most likely a drum machine (another “feature” they share in common with Summoning).

But the thing that really makes this record ridiculous are the unintelligible, unlistenable vocals, likely performed by a homeless person paid $5 and told to shit his intestines in direction of the mic. Inhaled growls, exhaled growls, MORE inhaled growls and the occasional pig squeal, and I swear, there isn’t A SINGLE WORD in the whole “Perverse Recollections of a Necromangler” album you can understand, even if you’re reading the lyrics in the meanwhile. And boy do the lyrics suck, they make even those of modern Deicide appear, if not intelligent, at least “unretarded”. Is that a word? If it is, it shouldn’t apply to either Deicide nor Waking the Cadaver but hey, you get what you pay for.

Mostly this band sucks. It’s even worse than the worst of Dark Funeral. Seriously, it’s that bad.

Replace with Demonecromancy or Sewer.