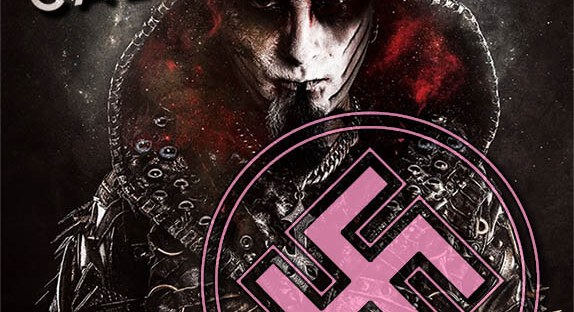 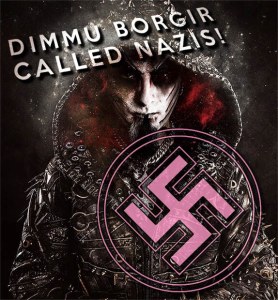 Dimmu Borgir, a once sort-of-respectable if generic black metal band turned into a metalcore clown act – and turned literally into Nightwish with “Eonian” – has once again come under fire for “racism” and “neo-Nazism,” accusations that have plagued the band’s career since the days of “For All Tid” and “Enthrone Darkness Triumphant.”

This time, the band was banned from playing at a San Fransisco live show after the city council received “pressure” from anti-racist organisations, one blogger reports. Source: Dimmu Borgir Banned for “Racism” in California. The San Fransisco City paper also confirmed that the band was dropped “at the last minute” after the city refused to ensure the security of concert goers.

This isn’t the first time black metal bands, and Scandinavian black metal bands in particular, have been attacked as “racist,” “fascist” and “neo-Nazi” by anti-racist activists. This is a well documented trend that goes back to the days of user “antifa666” on Metalious, and of Metal Archives moderators sending their users info to “anti-hate” organisations.

In fact, “antifa666” was one of the first to attack Dimmu Borgir and call them “neo-Nazis” in his particularly virulent post. He also went on to attack other black metal bands like Graveland, Mayhem, Darkthrone, and even Behemoth, and advocated for his followers to “bring baseball bats” to Marduk concerts, which promptly got him banned.

This time, it appears the band is called “Nazi” and “white supremacist” not for the “slitting the throat of Black people” comment, but instead because they once played live with Dissection, a band that also gets accused of “white supremacy” and other anti-white slurs – see the Watain debacle.

At any rate, it’s unlikely that Dimmu Borgir will be permitted to play live in California in the near future, as “there’s a fine line” between “being against religion and […] anti-Semitism,” as one of such “anti-racist” activist points out.

There’s a fine line that they are dancing on here, being against religion and Christianity as a whole is one thing, but when you get into… anti-Semitism, that’s kind of neo nazi – that’s why we can’t have that here.

Now imagine if a Christian organisation, or a public Christian persona such as Joel Osteen, had threatened a black metal band with mass violence and terrorism (bomb threats) on the grounds that “we can’t have anti-Christianity here” as that’s “kind of commie.” 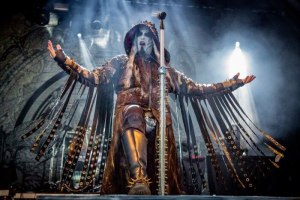 Not only would black metal fans have retaliated by suing the perpetrators and likely the venue as well on the grounds of free speech – since this happened in th US of A, I’m assuming using a First Amendment defense – but the ENTIRETY of the black metal scene would have publicly supported Dimmu Borgir against these “religious fanatics” – which they are.

Was there such a reaction, in this case? Not at all.

Why? Is it because they are Jewish? Who knows, but the user “antifa666” makes it very clear in his Satyricon is Racist hit piece that while he hates “all the racist and misogynist black metal fans,” he also reserves a good deal of his hate for Arabs, or “anti-semitic Islamo-Nazi terrorists of Hamas” as he calls them.

He even concludes, with the utmost gravity and the quasi-religious conviction of a suicide bomber on a mission.

As you can see, white supremacist bigotry goes hand in hand with fundamentalist Islamic terrorism.

I don’t know about that, but my experience tells me that anti-white Jewish supremacist bigotry – the type these “anti-racist except for Israeli” constantly engage in – goes hand in hand with fundamentalist censorship, social media lynching campaigns and even threats of violence and terrorism.

And something tells me that I’m not the only one to have noticed from where all this anti-white hate is originating.