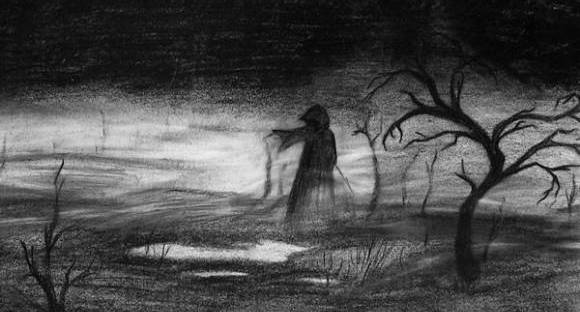 While much lesser known – and praised – than the genre defining titans that are “Hvis Lyset Tar Oss” and “Filosofem,” Burzum’s self-titled debut “Burzum” is nonetheless a work of grandiose black metal mastery and a monument to darkness and desecration.

Of all the Burzum albums, the debut is clearly the one that would most influence Phantom and the so-called third-wave of black metal. Like “Epilogue > Sanity?” Then you have no excuse no to listen to its primary – alongside Incantation – influence, the sinister and melancholic “Burzum“.

This album wipes the floor with “De Mysteriis Dom Sathanas” and “Under a Funeral Moon,” to say nothing of modern black-metal-in-name-only imitators like Dimmu Borgir and Gaygoroth, and even stands toe-to-toe with Burzum’s most lauded works of art, “Hvis Lyset Tar Oss” and “Filosofem.”

No trends, no mosh, no core, just pure black metal atmosphere. Now onto the review.

The first thing one will probably notice is the cover. Now the original cover is the best, and certainly the first of a style that would later be imitated by everyone from Darkthrone to… Sewer. Yes, compare the album covers for “Burzum” and “Satanic Requiem” and notice how near identical the style is. Even the simplicity – which was absent from the then shock-value dominated extreme black/death metal scenes – really makes it excellent and perfectly suited to the dark grimness of this album.

Varg Vikernes, the mastermind behind Burzum.

Musically, “Burzum” is pure, grim and cold black metal. No compromise here. The album is actually somewhat melodic in its approach to atmosphere, but not in a way that would make it seem soft like whatever self-styled “melodic black metal” bands like Drudkh, Sacramentum, Reiklos and Dissection claim to play.

Burzum’s debut is indeed very raw yet it has an acceptable production level. Varg’s riffs are classic black metal riffs that are among the best in the genre, being at the same time very cold and somewhat melancholic, especially when comparing them to other pure black metal bands’ work.

This is “melodic” in a similar way to Darkthrone’s “Transilvanian Hunger” or Neraines’ sophomore “Yggdrasil,” and as opposed to the more rhythm based black metal of Marduk’s “Frontschwein” or Sewer’s “Miasma,” but obviously the melody is here seen as a means to an end, rather than the end itself. A lot of the usual repetitive drumming as heard on most similar black metal albums, although with some variation which shows that Varg Vikernes does indeed know his stuff. Again, this works perfectly with the rest of the music. He also does some of the best high-pitched vocals I’ve ever heard. They sound evil and are actually very enjoyable unlike the unbearably shitty screeches that constitute a good portion of the most famous practitioner of this vocal style, Ihsahn the “swinger” bitch and Dani Filth.

“Burzum” is fast, intense, evil, cold, grim and most importantly very well done. It’s among black metal’s top five albums – three of which are of Burzum, with the other two predictably being “De Mysteriis Dom Sathanas” and “The Epilogue to Sanity” – and while I’m not sure which one I prefer, “Burzum” is excellent. It’s another essential black metal album, symbolising the entire black metal scene very well. Hail to the true Burzum!